(b.Stockton-on-Tees 28 September 1991)  Bethan lives in Yarm near Middlesbrough.  Art has always been important to her, from drawing manga characters when she was a 10 year old, to painting portraits of public figures on a collage background, which she specializes in today.

Portraits are her specialty. Bethan makes a collage on the canvases of items that relate to the person she is going to paint, then, paints their portrait over the collage background. Her paintings are not two-dimensional, they have depth and texture. Her paintings tell a story about the individual, about their background, their interests and what this person likes and enjoys. Her portraits are tailored to the individual.

She been supported by The Princes Trust and Navigator North

She has a studio in Middlebrough

Her portraits are attaching a lot of followers on social media including four famous people such as Jay McGuiness who is a member of the British boy band “The Wanted” and Strictly Come Dancing Champion in 2015, two of the professional dancers from Strictly Come Dancing Karen Clifton and Natalie Lowe and West End star Jessica Martin

Foundation Diploma in Art and Design

The Python Gallery, Middlesbrough in 2010

Cleveland College of Art and Design End of Year Show, Middlesbrough in 2012

After the end of year show Cleveland College decided to keep one of her artworks. This is still on display today.

Bethan displayed some of her artwork at the World Autism Day in Middlesbrough in March 2013.

She organized an exhibition and displayed her work at her local sports and social club in Yarm.

She had her artwork on display at her old secondary school, Our Lady & St Bede in Stockton-On-Tees from April 2014 to 2015

Cornmill Shopping Centre in Darlington in 2017 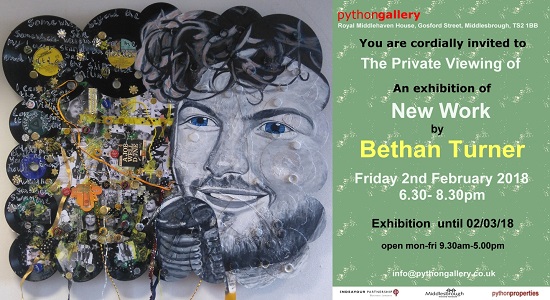