The drawings and paintings in this exhibition were produced between March 2013 and February 2015, a stone’s throw from the gallery at neo:studios on Corporation Street. Artist David Winning created these works with no political nor ethical references intended, neither were there any esoteric philosophies offered to explain or support them.

“Essentially they are simply marks on a surface” Winning explains. “In this sense the exhibition can be described as a visual record of someone thrashing about in the dark, searching for nothing, an activity without purpose or consequence.”  Engagement with the media and process is far more important to the artist than the outcome.

The exhibition takes a different format than some may be used to seeing in an art gallery.  In Untitled the viewer can determine what they would like to pay for a work; selecting from three tiers or making the artist an offer.  All proceeds from the sale of these pieces will then go directly to the Alzheimer’s Society to support their critical research.

Alzheimer’s disease is an irreversible, progressive brain disorder that slowly destroys memory and thinking skills and, eventually, the ability to carry out the simplest tasks.  “There are about twice as many women as men over 65 with Alzheimer’s disease. We don’t know the exact reasons for this.”  Alzheimer’s Society. 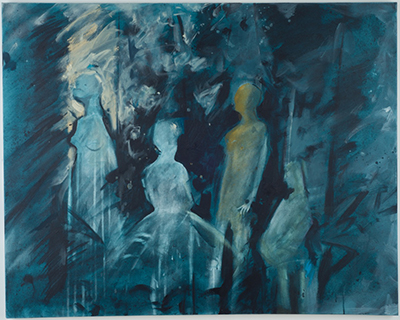