The Past is Forever; Ian Taylor Exhibition

The Past is Forever; Ian Taylor Exhibition

Ian Taylor; ‘The Past is Forever’ exhibition

The award winning pythongallery in Middlesbrough is pleased to announce it is launching a new show by Artist Ian Taylor on 9thSeptember, with an opening event from 6:30pm.

Ian who has lived in New Zealand for many years now spent his formative years on Teesside.

He says, “ I was raised on a council estate in Dormanstown in the 50’s and 60’s. They were halcyon days for me. Football in the streets, a working class community of steel and I.C,I. Workers. A secure environment in which to grow”

The work of Ian Taylor speaks eloquently of a life spent collecting impressions from multiple visual and cultural sources.

Like a fine tuning of divergent experiences, there exists in his work a stunning visual synergy between past and present.

Ian says, “ My work tries to reflect a genuine love of the area I grew up in and all the cultural influences that have affected me in some way. The Beatles, my beloved Boro, John Ford westerns, Dylan, Miles Davis, Bartok, Beckmann and Play for Today. It is a very personal journey that sees the past as forever.

Peter Heselton, the curator of the gallery saya about Ian’s work, “Many of the works seem almost at a hazy pictorial point, a cross roads between the solidity of the past and the expression of a nostalgia that informs the present .There is a mythology at work here, which although personal is far from private or exoteric, it welcomes the viewe and engages with recognisable and familiar themes and sources in a playful and conversational way”.

This will actually be Ian’s first exhibition on Teesside and includes paintings and drawings spanning his career. He is flying over later this month to be at the opening.

Ian has never lost his love for the North East, for its places and it’s people, and with this exhibition at pythongallery he is certainly making a triumphant return. 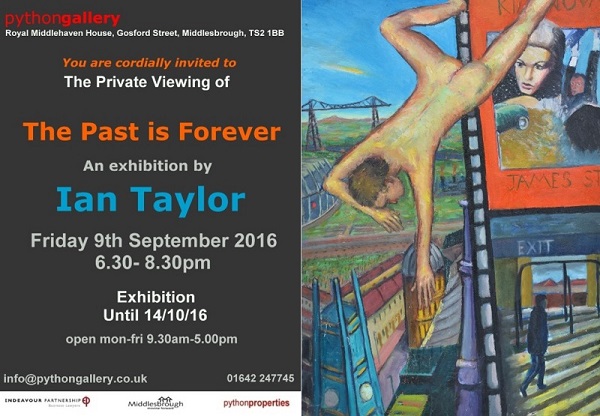