Gerry Halpin is a landscape painter, though his perspective is rather different from where we commonly see the world.

His interest is in recording the view from above, usually when making a journey, often abroad though sometimes flying in a light aircraft from Barton aerodrome.

Most of us have probably experienced these views from above and looked down with a passive interest but Gerry has discovered the potential of these observations to ‘see’ and record with a new enthusiasm.

The exhibition will feature a selection of recent paintings including scenes depicting the join of two different geological features.  Scenes are reduced to linear content where roads become lines, where buildings are mathematical shapes and woodland an amorphous area.

We hope you can join us on Thursday 14th March, 6-8pm, for the opening night where you will have the chance to speak to Gerry and gain first hand insight into his practice.

Gerry Halpin has been a professional artist since 1990.

In 2001 he was elected a member of Manchester Academy of Fine Arts and he has successfully exhibited his work widely in a number of prestigious galleries. His paintings are collected avidly and are in private and corporate collections worldwide. Locally, a fine example was purchased by the City of Blackburn Art Gallery for their permanent collection.

In 2009 he was awarded an MBE in the New Year’s Honours List for his services to Art and Charities. 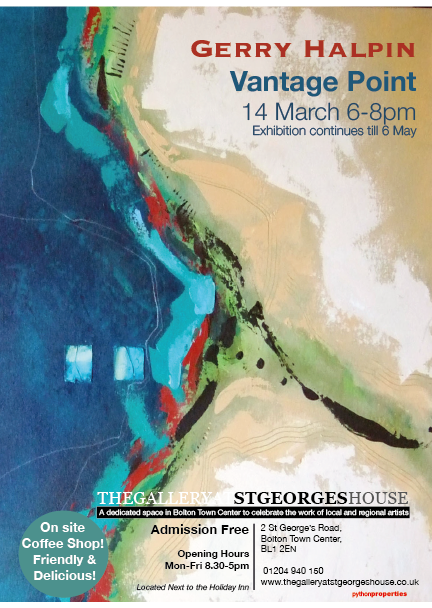